Whales are mammals just like humans. Like all land mammals we breathe involuntarily without having to think about it, our bodies just do it for us automatically. Maine mammals on the other hand spend their lives underwater. They are described as being conscious breathers as they have to actively decide when to breathe.

Humpback whales have lungs the size of a small car and when they take a breath they exchange up to 90% of their lung capacity. They exhale with great force! The existing air has been estimated to be travelling in excess of 300 kilometres per hour. We see this as the whales ‘spout’ which can be up to four meters high and is actually any water around their blowholes being blown clear.

Humpbacks usually take a series of breaths between shallow dives as they recharge their blood with oxygen. This is called their up time. At the end of their last breath they will commence a deep dive by arching their backs and sometime lifting their tails clear of the water and commence an extended time underwater commonly referred to as their down time. Most spectacular of all the whale behaviours, breaches are when the whale jumps clear of the water. It is also sometimes referred to as cresting. Manly whales species such as Humpbacks, Right, Sperm, Orca and dolphins are famous for breaching.

Breaching is defined as being different to lunging or porpoising as they are done intentionally, with more than 40% of the animal leaving the water and are not as a result of another activity such as feeding.

Many reasons have been suggested for why whales breach. It may be to communicate with other whales nearby, dislodge parasites from their skin, stun prey or simply for fun. The whale raises its head clear of the water and slaps it on the water surface. This would be considered more of lunging behaviour than breaching. The whales raises one or both pectoral fins clear of the water and slaps them on the water surface. Tail slapping may be to communicate with other whales nearby, scare prey, defence or display. A tail throw is a very energetic and violent action where the whale virtually pivots on its head and violently swings its tail and peduncle (rear part of its torso) clear of the water and crashing them onto the water with terrific force.

Tail throws usually take place as part of the mating activities and may be in response to the challenges of a competitor. When a whale wants to see something above the water it can raise its head clear of the water and take a peak. Usually it holds itself vertically in the water so that its eyes are clear of the water. This behaviour is very common amongst Orcas when they are hunting seals that are resting on top of the sea ice. Humpbacks are also known to do this out of curiosity when they want to check out a nearby whale watching boat. Who’s watching who ha? 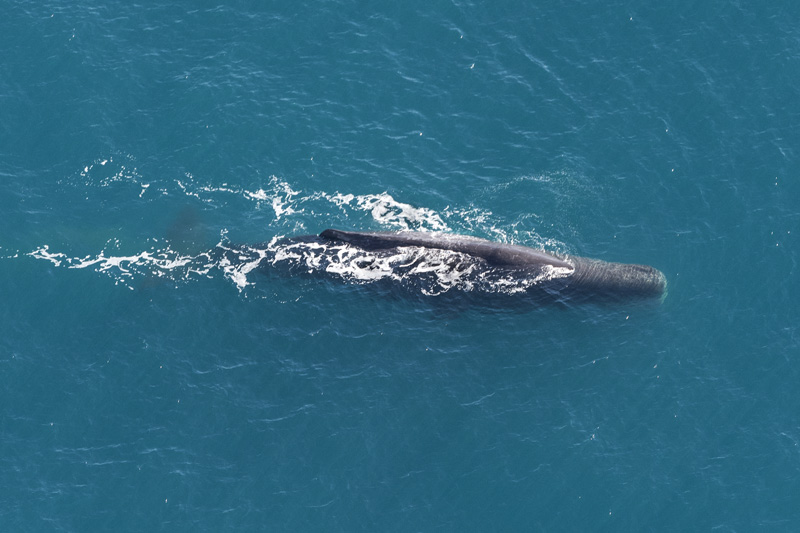 A Sperm Whale Sleeps on the Surface

As mammals our brains need to enter an unconscious state while we are asleep in order to function properly. That’s fine for land based mammals but impractical if you’re a marine mammal living underwater and have to be conscious to remember to swim and to breathe.

So whales and dolphins sleep by shutting down one half of their brain at a time. In this way the animal is never completely unconscious, but it still gets the sleep it needs. When whales are sleeping they may be observed moving slowly on the surface. Sperm whales have been seen in groups hanging vertically with their heads near the surface. Whales have developed a wide range of feeding adaptations and methods depending on what they eat. These different methods fall into several board groups – filter feeding, sucking and biting.

The Baleen whales essentially ‘filter feed’ by their very nature. They do this by taking large mouthfuls of water and food. Then using their tongue like a ram rod they push the water out of their mouths, separating the food out with their baleen plates. They have several different methods of doing this.

Gulping – In the Southern Ocean giant ’swarms’ of Krill form. There can be tens of thousands of them packed together and the best way to eat them is by the giant mouthful. This is the way the great whales feast upon them. A Blue whale can take thirty thousand litres of water in one mouthful. When your keeping the largest animal thats ever lived powered you need to.

Lunge Feeding – The largest of the Baleen whales do this by ‘lunge feeding’ where the whale will approach a thick swarm of Krill at speed, open their mouth wide and lunge to encompass as much of the swarm as possible. Often they turn onto their sides when doing this. They then rest on the surface like a giant tadpole pumping the water out of their mouths.

Skimming – Another version of this method practiced by Right Whales is called ‘skim feeding’ where the whale swims along on the surface with their mouth partly open and cruises through the swarms of Krill.

Bubble Netting – Humpbacks have developed a sophisticated techniques of hunting fish called ‘bubble net feeding’. The whales dive deep as a group and swim back to the surface in a corkscrew pattern blowing bubbles as they do. The bubbles rise to the surface faster than the whales herding the terrified Krill or fish into concentrated balls at the surface. The whales all arrive together, mouths opened wide underneath the food ball ready to take large gulp of food.

Filter Feeding – Gray whales are filter feeders too yet unlike the other Baleen Whales they suck up mouthfuls of mud and sediments on the ocean floor and then spit out everything but their prey.

The toothed whales are active hunters, pursuing their prey. Sperm Whales are the largest predator on Earth. They use their teeth to grab and hold it. If it is small enough they will suck it down whole if not they will shake it apart into swallowable sized pieces.

One way scientists have been able to learn about each species diets is by examining their teeth. Whales with sharp teeth are lightly to hunt larger prey including seals and other whales. Whales with teeth that are noticeably worn down tend to eat by sucking up small fish.

When do whales eat?

What whales eat and when they do so very much depends upon the species and what that particular species eat. Some whales live the whole year in one location, others make some of the longest journeys in the animal kingdom. Some hunt fish in the bays where they live, some dive to the bottom of the ocean hunting Giant Squid, many travel deep into the rich cold waters off Antarctica looking for the huge upwellings of Krill. On the Road – Whales make some of the longest migrations of the animal world. Humpback whales have to travel extraordinary distances between their rich feeding grounds deep into the Southern Ocean to their breeding grounds in the warm tropical waters off northern Australia and the South Pacific. They are forced to do this because of two simple facts. The huge swarms of Krill they depend upon are only found in the waters off Antarctica. To survive in these cold waters you need thick blubber layers to insulate you, something baby Humpbacks are born without. So the Humpback cows have to travel to warmer waters to give birth.

What do whales eat?

Blue Whales – Blue whales primarily eat krill although other small ocean creatures such as copepods can be ingested as well.

Humpback Whales – Humpback whales are known for eating krill and a variety of small fish such as salmon, herring and mackerel.

Orcas – Killer Whales eat a wide variety of  small aquatic animals such as fish and squid as well as larger marine mammals like sea lions, seals and other whales.

Southern Right Whales – The primary diet of southern right whales consists of krill, mysids and plankton among other tiny crustaceans.

Sperm Whale – Sperm whales are famous for their epic battles with Giant Squids. They also eat a variety of other squid species as well as fish. Dolphins – Dolphins eat a large variety of foods such as fish, squid, sea lions, seals, sharks and even large whales.