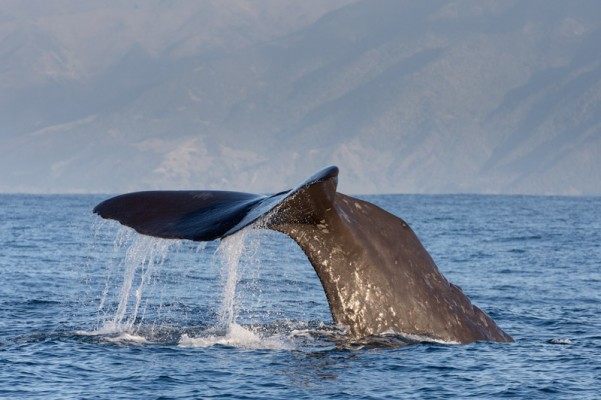 What intrigues you? Makes you stop and look in wonder? As I’ve pondered the earth I’ve come to realise that it really is a miracle that we’re here at all if you think of all the chance against it happening at all. The more you realise this the more you’ll see the planet as a precious and fragile place. So you can only imagine what a treat it is to visit a place like Kaikoura where a coming together of unusual geological formations have allowed nature to do truly stupendous things.

A Volcanologist once described New Zealand to me as being like a geological Disneyland due to the wide variety of  features such as high mountains and volcanos. And it really is! Long story short lets just say there a lot going on under New Zealand where two tectonic plates, the Pacific and Australian collide. All this rubbing, pushing and shoving has caused mountains to rise, volcanos to burst forth and deep sea trenches to plunge.

The waters off Kaikoura are deep, very deep and unusually close to the coast. The Kaikoura Canyon is a U shaped submarine canyon 60 km long and plunging to depths of 1200 metres that  lies to the south of the Kaikoura Peninsula. The Canyon feeds into the of 3,000 metre depths of Hikurangi Trough which lead out into the Pacific Ocean to the North East of New Zealand. 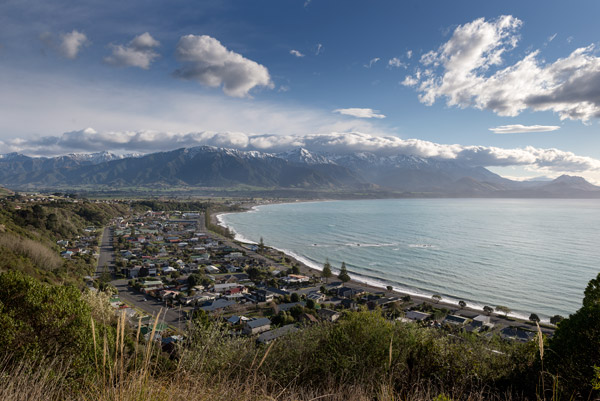 Kaikoura with the Seaward Kaikoura Mountain Range in the background

Its the deep sea canyons and troughs that make Kaikoura one of the premier whale watching places on earth! 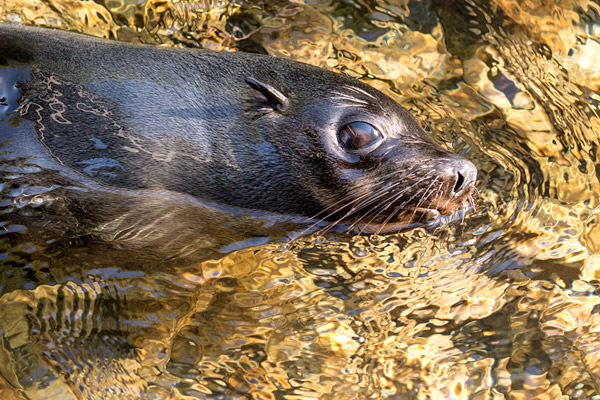 Sperm whales hunt in the deep! Usually the deep waters they prefer are off the continental shelf far from land. So having such deep, rich waters so close to land is what makes Kaikoura so special. These rich waters concentrate marine life into what scientists refer to as a ‘biomass hotspot’ – many different species in abundance. So rich that Dusky Dolphins play in pods numbering into the hundreds, sometimes thousands. Seals crowd the shoreline in large colonies and fish the waters. Sperm whales cruise along the coast year round feasting on squid and fish. 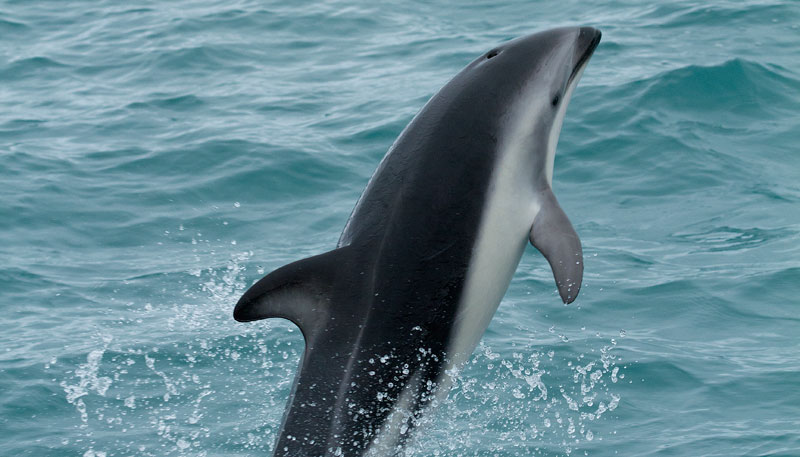 The waters are so rich that Sperm whales have been able to stay year round rather than migrating to forage. 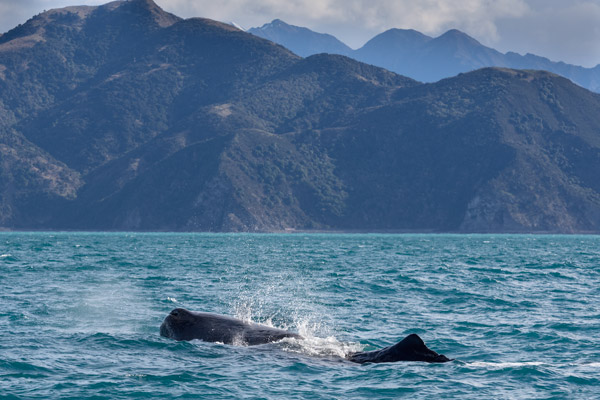 A Sperm Whale (Physeter macrocephalus) prepares to dive off Kaikoura

The Gift of Kahukura

The bountiful lands of the Kaikoura region were originally known as ‘Te Koha O Kahukura’ (The gift of Kahukura) and the ocean ‘Te Tai o Marokura’ (the sea of Marokura). Kahukura and Marokura were Gods who shaped the land and sea. Kai Koura comes from the Maori ‘Kai’, to eat and ‘Koura’ which means Crayfish (Rock Lobster).

The Kaikoura region was a rich hunting ground for the Maori peoples for the best part of a 1000 years. At least 14 Maori pa (villages) were occupied in the area before Europeans came. Giant Moa birds roamed the forests and abundant crayfish were to be found along the rocky shore. The largest Moa egg ever found in New Zealand (240mm long, 178mm in diameter) was unearthed  at a burial site on the peninsula in 1857 near the present-day Fyffe House.

The legendary demigod Maui is reputed to have caught and hauled up the giant fish that became the North Island from these waters. 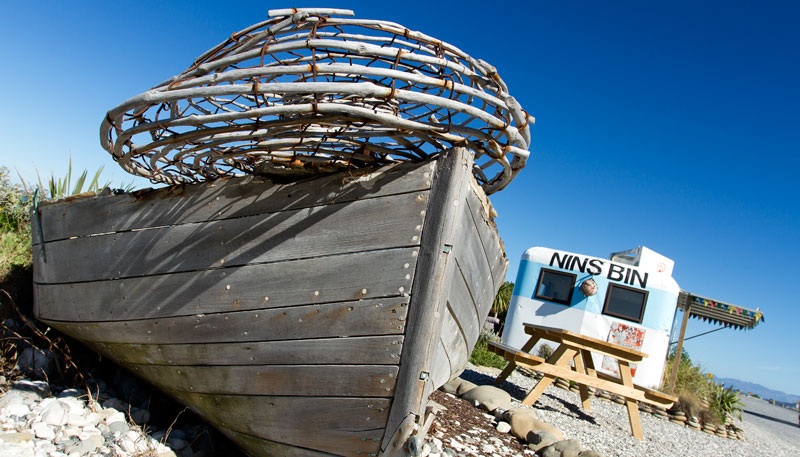 The original Maori people of the Kaikoura region were the ‘Waitaha’ who were later joined by the ‘Kati Mamoe’ people. These tribes lived together peacefully until about 350 years ago until the arrival of the ‘Ngati Kuri’ a  sub tribe of the Ngai Tahu. There were many battles between these tribes before the ‘Waitaha’ and ‘Kati Mamoe’ gave up their rights to the lands to the ‘Ngati Kuri’. Today descendants of all three tribes still live in the Kaikoura region.

In 1828 a war party led by chief Te Rauparaha arrived in Kaikoura resulting in a huge battle on the beachfront in which many hundreds of the Ngai Tahu tribe were killed or captured. 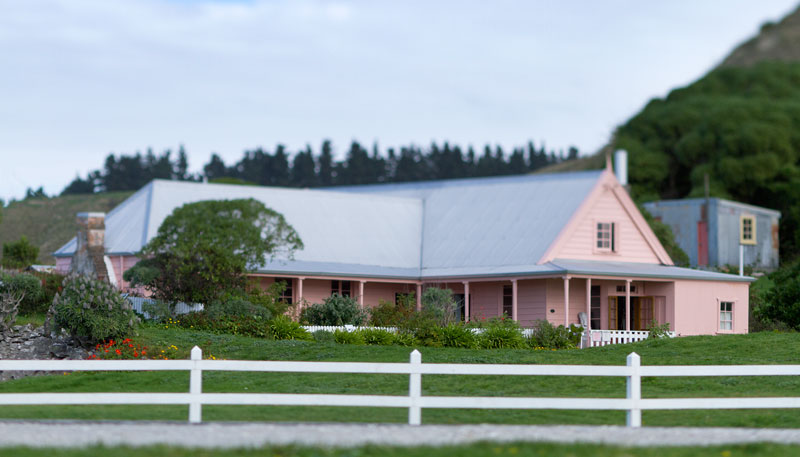 James Cook and the crew of Endeavour were greeted by Maori canoes when they sailed past Kaikoura in 1770. By the late 1700’s european whales and sealers were in New Zealand waters, operating from ships during the summer months from October to May.

Shore based whaling stations were setup during the early 1800’s which allowed whalers to operate from the safety and comfort of land. Southern Right Whales (Tohorā) were the first to be caught in the bays and off the coast, then brought back to the land to be processed. It was cheaper to run and produced a higher quality of oil that ship based whaling. The boom years were in the 1830’s but the terrible price of bay whaling was that cows and newborn calves where the first to be taken causing a rapid decline in whale numbers.

Captain Robert Fyfe 1811 – 1854
The first shore based whaling station to be established in the Kaikoura area was the Waiopuka Fishery setup by Captain Robert Fyfe in 1842. More stations quickly followed at South Bay. Construction of Fyffe House started around 1844 with the Coopers Wing (the left side of the house), with the extensions added over the years. Unusually whale bones were used as piles and foundations for the building.

Whaling was profitable during the 1840’s but by the end of the decade Robert Fyfe was using his schooner Fidele to ship in supplies for settlers in the region and was farming sheep himself. Robert Fyfe was drowned in April 1854 when the Fidele capsized and sank south of Cape Campbell while shipping whale oil to Wellington.

Today Fyffe House is maintained by New Zealand Historic Places Trust and is open to the public as a museum to the whaling and early history of Kaikoura. To find out more about the house and opening hours please visit their website Fyffe House Website

An in depth history of Fyffe House and whaling in Kaikoura has been written by Jan Harris – Details below.

Whale and Dolphin Tours in Kaikoura

Kaikoura is one of the premier whale watching places on earth! 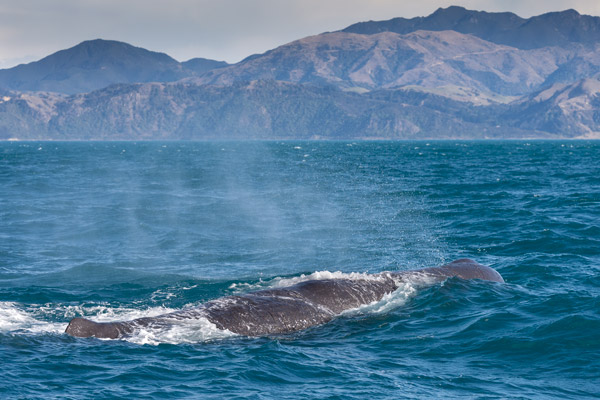 Whale Watch Kaikoura
Given Kaikoura’s long association with whales it seems only natural now that whale watching would become a primary tourist industry in the area. But it took the tough economic times of the 1980’s and the vision of local indigenous elders such as Bill Solomon to follow the example of their great ancestor Paikea ‘The Whale Rider’ and set up Whale Watch Kaikoura.

Since then Whale Watch Kaikoura has grown into a multiple award winning business that is counted as one of New Zealand’s leading tourism experiences. Whale watching trips leave daily depending on weather and sea conditions. Please see Whale Watch Kaikoura’s website for current conditions and trip availability. WWK Website 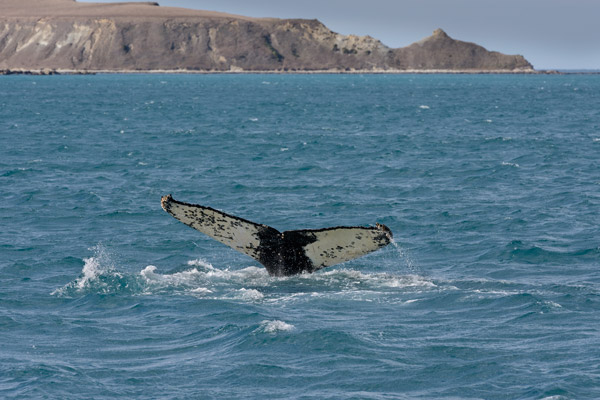 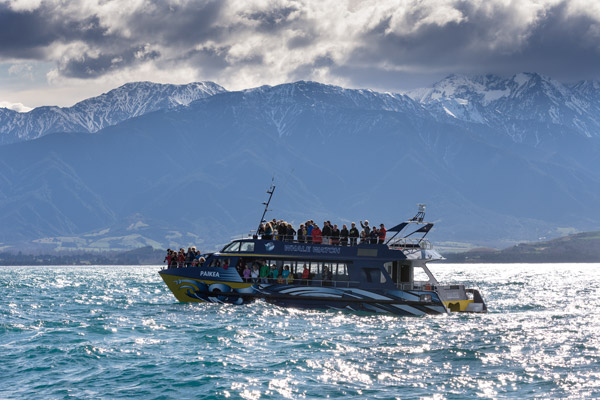 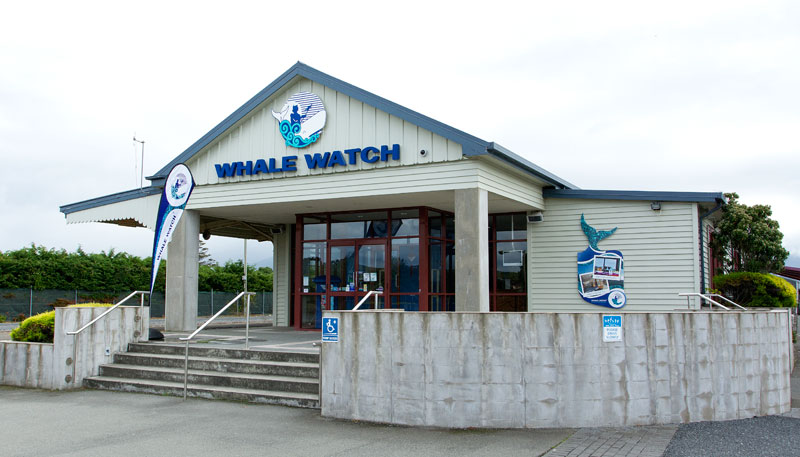 Dolphin Encounter
Dolphin Encounter started at almost the same time as Whale Watch Kaikoura offering the unique and authentic experience of swimming with the local Dusky Dolphins. This interaction is completely natural and at the discretion of dolphins as they are not enticed in any way. Dolphin watching and swimming trips leave daily depending on weather and sea conditions. Please see Dolphin Encounter’s website for current conditions and trip availability. DEK Website

While your there don’t miss Dennis Buurman’s wonderful whale, dolphin and bird photographs in the gallery. 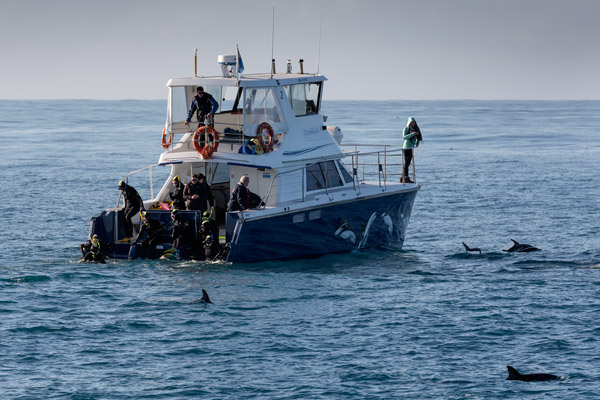 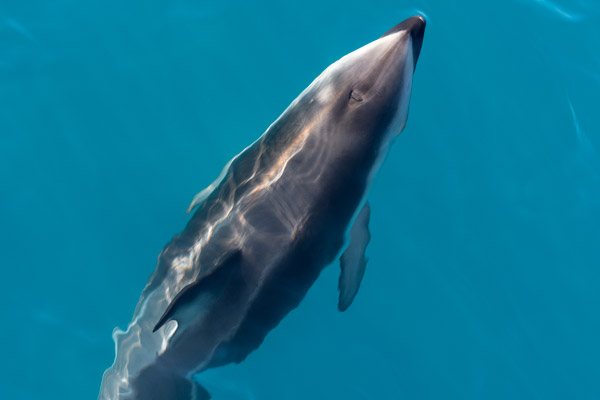 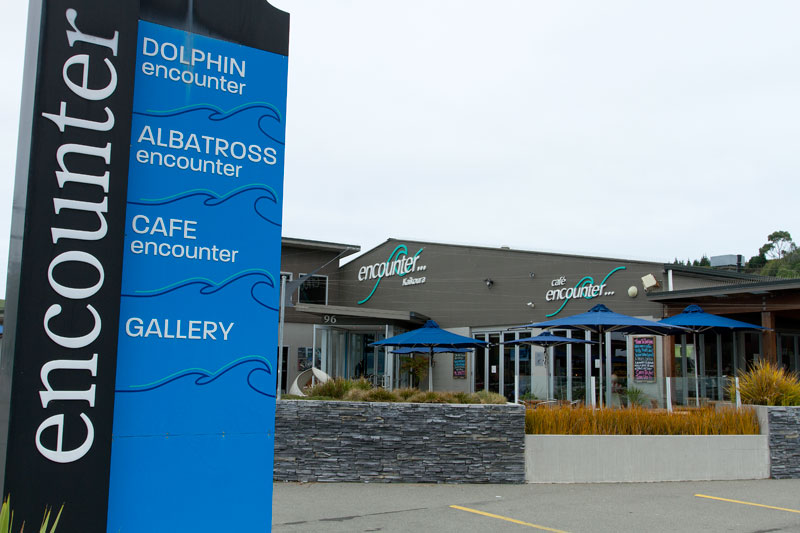 Wings Over Whales
I can see for miles and miles, there is nothing like seeing the world from above! Wings Over Whales gives you an amazing opportunity to see the beauty of Kaikoura from the air with 30 minute sight seeing flights. It was amazing to see Sperm Whales cruising, their lower jaw glowing in the water and hundreds of Dusky Dolphins playing all set against the beauty of the  mountains and ocean. 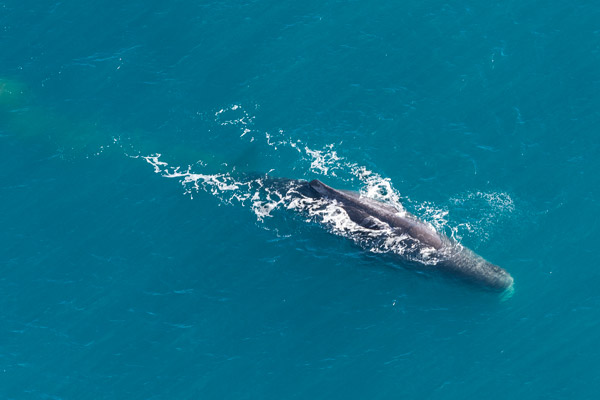 A Sperm Whale (Physeter macrocephalus) cruises the waters off Kaikoura 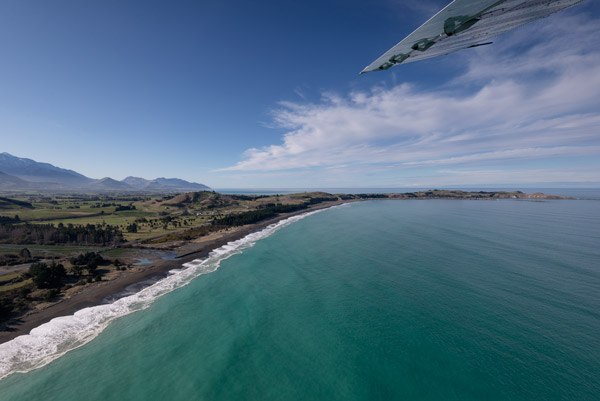 The magnificent view north across South Bay to Kaikoura 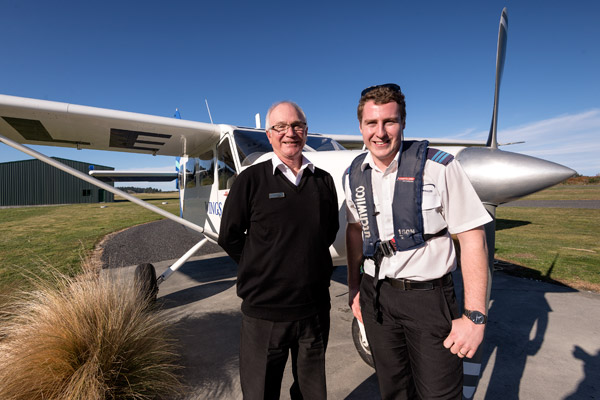 John and Liam from Wings Over Whales

Origin of name: Originally called Te taumanu o te waka a Maui, the thwart of Maui’s canoe. It was later renamed Kaikoura by Maori Chief Tamaki-te-rangi, who stopped for a feed in the area while chasing his runaway wives. Kaikoura is Maori for “meal of crayfish”.
Population: 3000 (Approx)
Where is it: East Coast of the South Island of New Zealand. 180km north of Christchurch (approximately three hours drive), 156km south of Picton. You can also get there on the TranzCoastal train, which offers wonderful views along the coast.
The town slogan: ‘Where the mountains meet the sea.’
The town mascot: The whale.
Interesting geological fact: The Kaikoura Peninsula was originally an island and was linked to the mainland by sediments brought down from the mountains by the Hapuka and Kowhai rivers.
Local Industries: Farming is the backbone, and tourism, namely whale watching, is close behind. 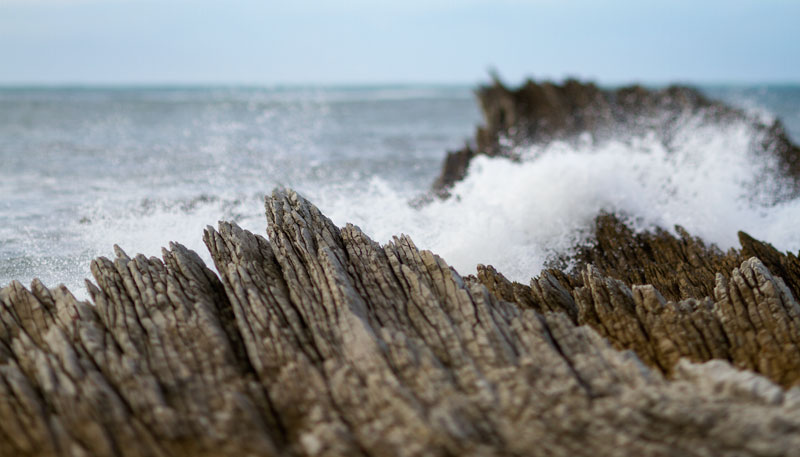